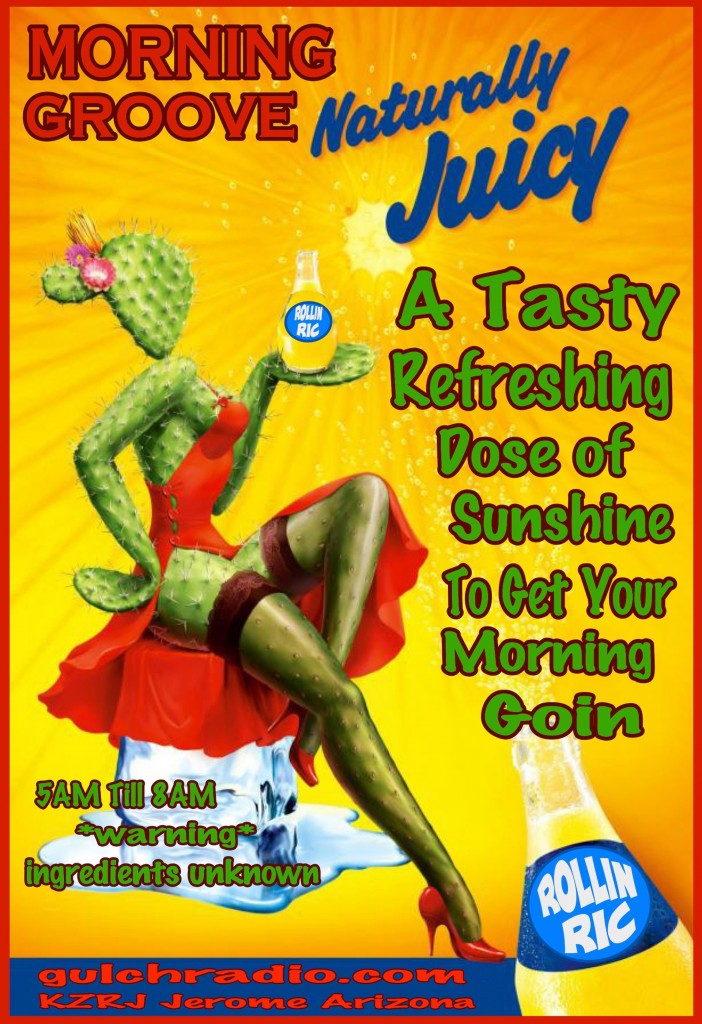 Ric does a local, live show, featuring a variety of rock/soul/county classic tunes and new tunes to make the mornings move along, some comedy, satire, and weather tossed into the mix. 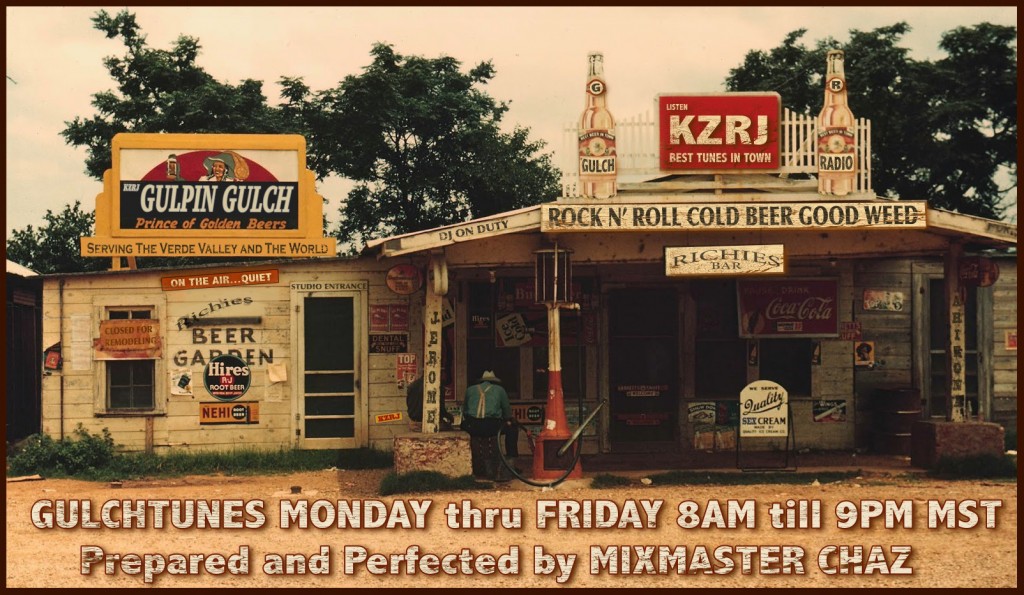 Alternative -Rock – Reggae – Blues – Country – Folk – and best of all, fodder free, we use only the tastiest ingredients mixed together with love and care by Gulch Radio’s beloved “mixmaster” Chazman – the behind the scenes lightning rod that keeps it all happening here at Gulch Radio! 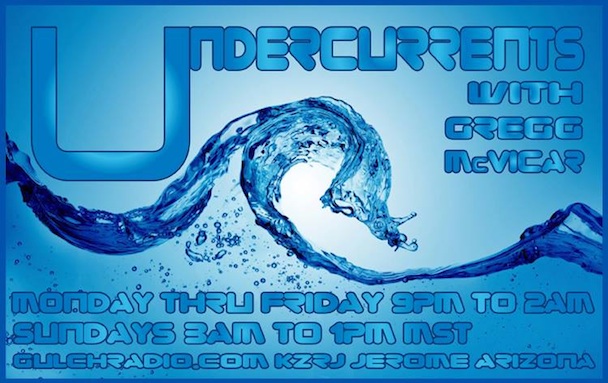 9 PM to 2 AM MST – UnderCurrents with Gregg McVicar

Rock, blues, folk, native, country, funk, electronica, reggae, world, conscious hip hop, dub, and more. Hosted by Gregg McVicar, UnderCurrents is intelligent, fun and easygoing – diving deep to reveal past and future favorites. You can find the playlist for UnderCurrents shows, both past and current at: http://www.undercurrentsradio.net/UC/Playlists.html 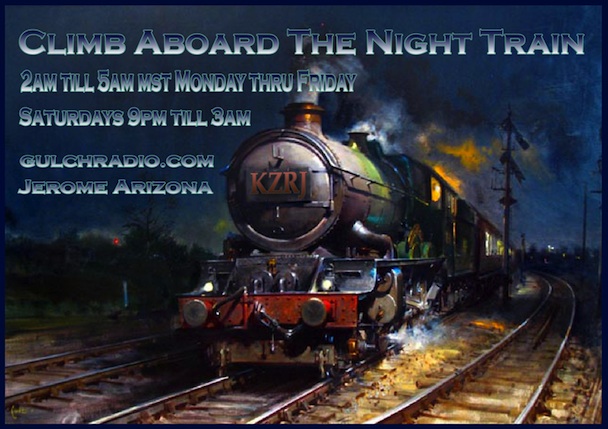 2:00 AM- 5:00 AM MST Monday thru Friday/Saturday9 PM to 3 AM MST – The Night TrainClimb on board for a ride through a world of rich and mellow rock with an emphasis on soul and romance and a train track or two – music to keep your late night/early morning groove on the right track.

“The Hermit” hosts Stuck in the Psychedelic Era twice weekly two hour radio show on gulchradio.com FM100.5 KZRJ Jerome, AZ featuring music from roughly the years 1964-69. The show is literally a throwback to the days of “underground” radio. There are no pre-recorded jingles or promotional spots; just two hours of music, punctuated by occasional commentary by The Hermit, whose own radio career began on a small closed-circuit station in the early 70s.

The Hermit takes lot’s of his music directly from vintage vinyl, scratches and all. The rest comes from Compact Disc compilations and re-issues of original albums, all taken from the Hermit’s personal collection.

Commentary is centered on the music itself: artist histories, contextual information, anecdotes, personal memories and occasional forays into how the music of the psychedelic era relates to today’s world. Each week The Hermit writes a blog, The Hermit Rambles about the featured music in the current show as well as his archived show – read about the music: http://www.thehermitrambles.blogspot.com/ 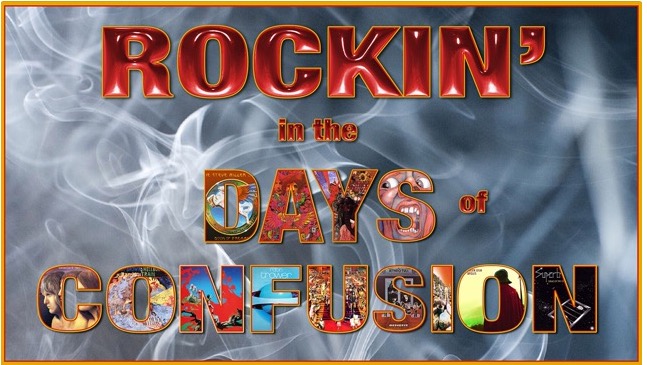 Rockin’ in the Days of Confusion is a weekly 60-minute show that revisits the golden age of progressive rock radio (roughly the years 1968-76). Emphasis is on longer album tracks covering a variety of rock sub-genres, including hard rock, folk-rock, heavy metal, jazz-rock fusion, art-rock and more experimental tracks that defy easy classification. As is the case with our sister show, Stuck in the Psychedelic Era, Rockin’ in the Days of Confusion has no pre-recorded jingles or liners. Commentary is centered on the music itself, with additional track information available at thehermitrambles.blogspot.com (or by hitting the blog button at hermitradio.com). 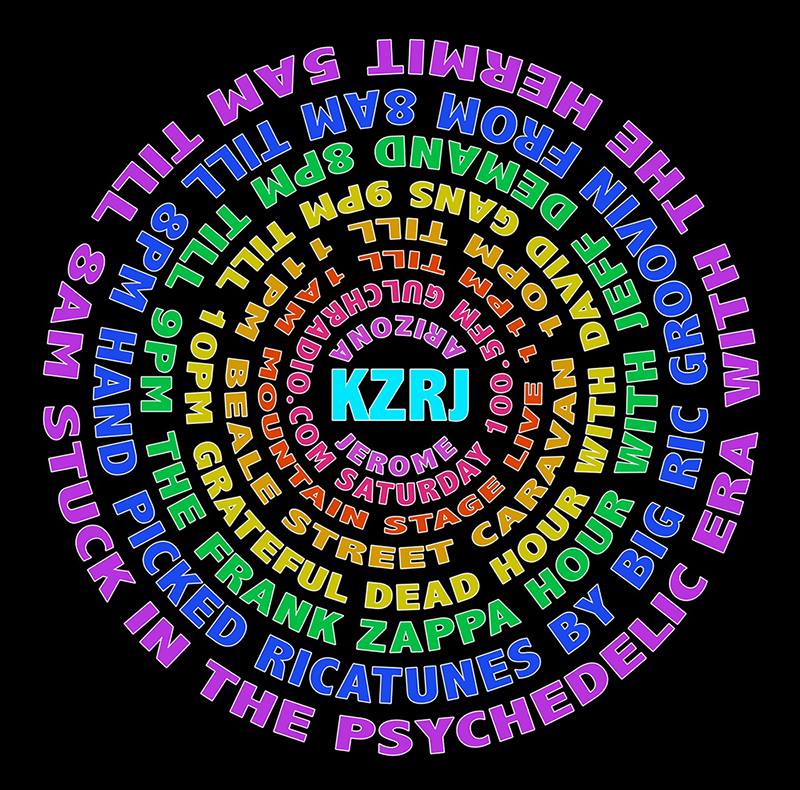 Saturday 5 AM to 8 PM MST – Three hours of Stuck In the Psychedelic Era and Rockin’ In the Days of Confusion – The Hermit takes over the early morning with his great shows, if you missed the most recent episode on Thursday night, catch up on Saturday morning, plus you get an added encore hour to enjoy this great show. 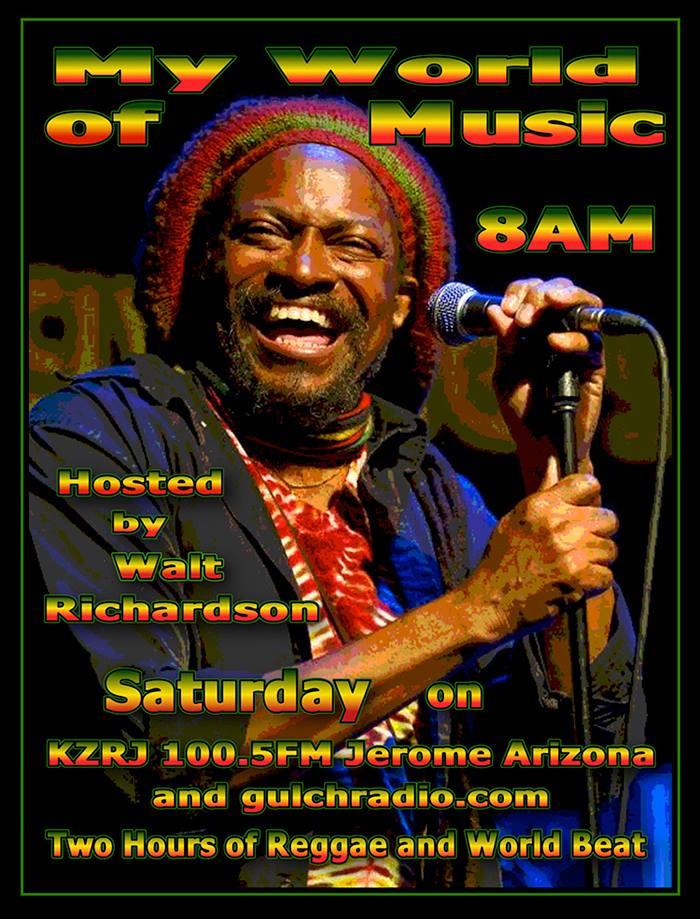 There are lots of musical surprises… pieces you haven’t heard before… but find intriguing. A hot Mambo band, a South African chorus, Arab groove, Bob Marley performing live, a steamy Samba, a Reggae version of Bob Dylan’s classic “Maggie’s Farm”… Much of the music in this program is highly rhythmic, danceable mix.This is the kind of variety listeners can expect to hear on My World of Music.

Host Walt Richardson is essentially a Reggae man; A working artist, performing singer-songwriter, with a passion for rhythm and acoustic guitar.

Known throughout his home state of Arizona, this celebrated son was honored with an induction into the Arizona Hall of Fame for 2014.  During his 30 plus years as a both a solo artist and bandleader, Walt has toured throughout the United States and Mexico, and shared the stage with Reggae greats like Third World and Ziggy Marley.  He’s current working on his fifth recording.

Saturday 10 AM to 6 PM MST – GulchRadio’s weekday morning man, Ric picks the Saturday platters to keep you movin’ from early morning to late afternoon, then shifts the mood to a more evening offering of rock, blues, soul and more right up to Jeff Demand’s Frank Zappa Hour, exclusive to Gulch Radio at 8 PM MST. 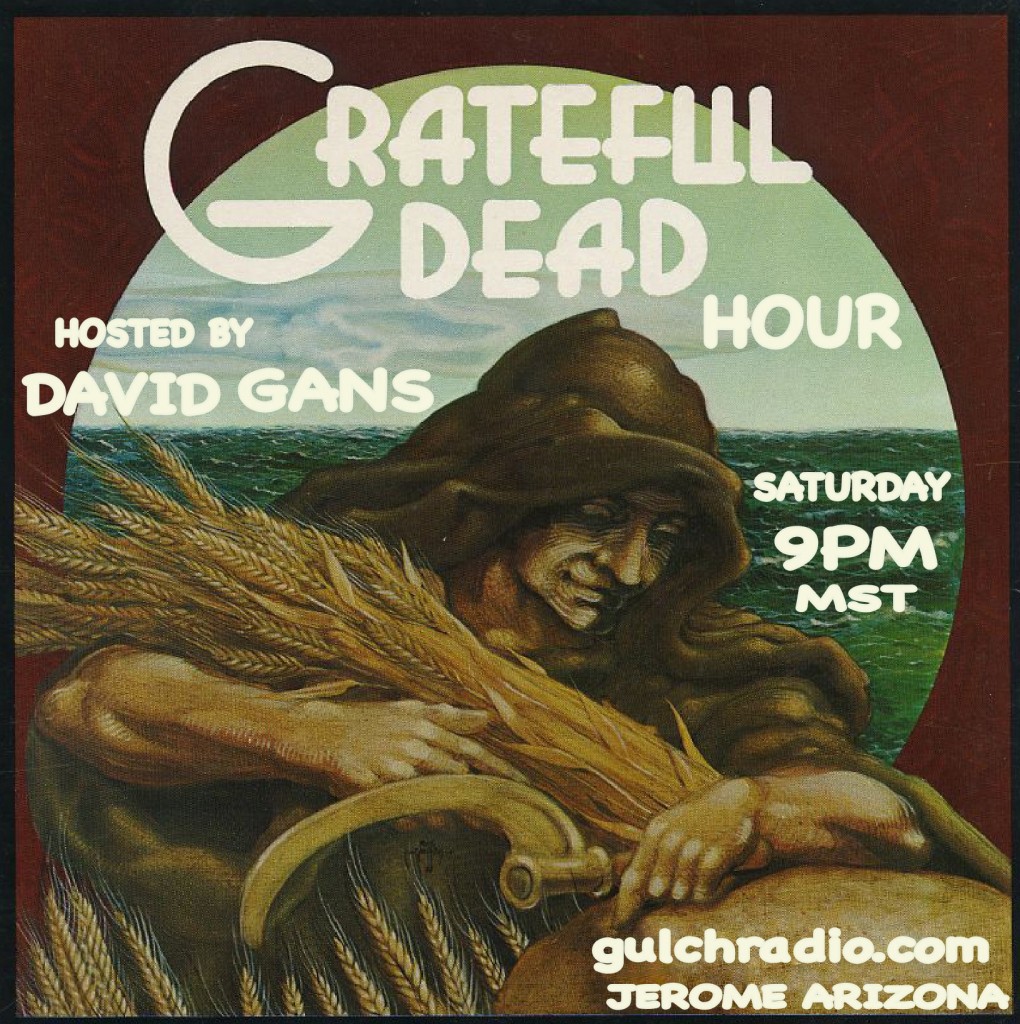 Saturday from 9 PM to 10 PM MST – David Gans and the Grateful Dead Hour.

One hour of the Dead – music and interviews every Saturday night on gulchradio.com FM100.5 home sweet Jerome. 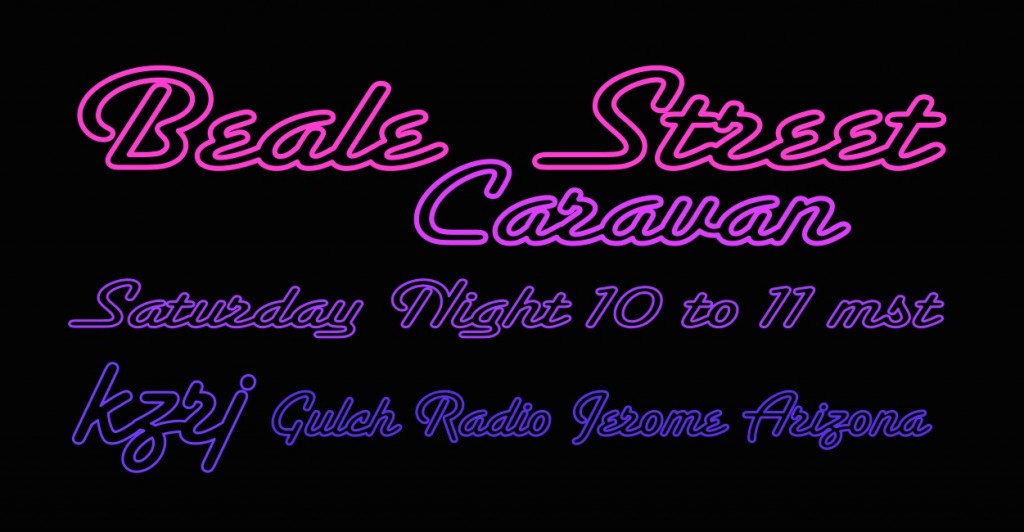 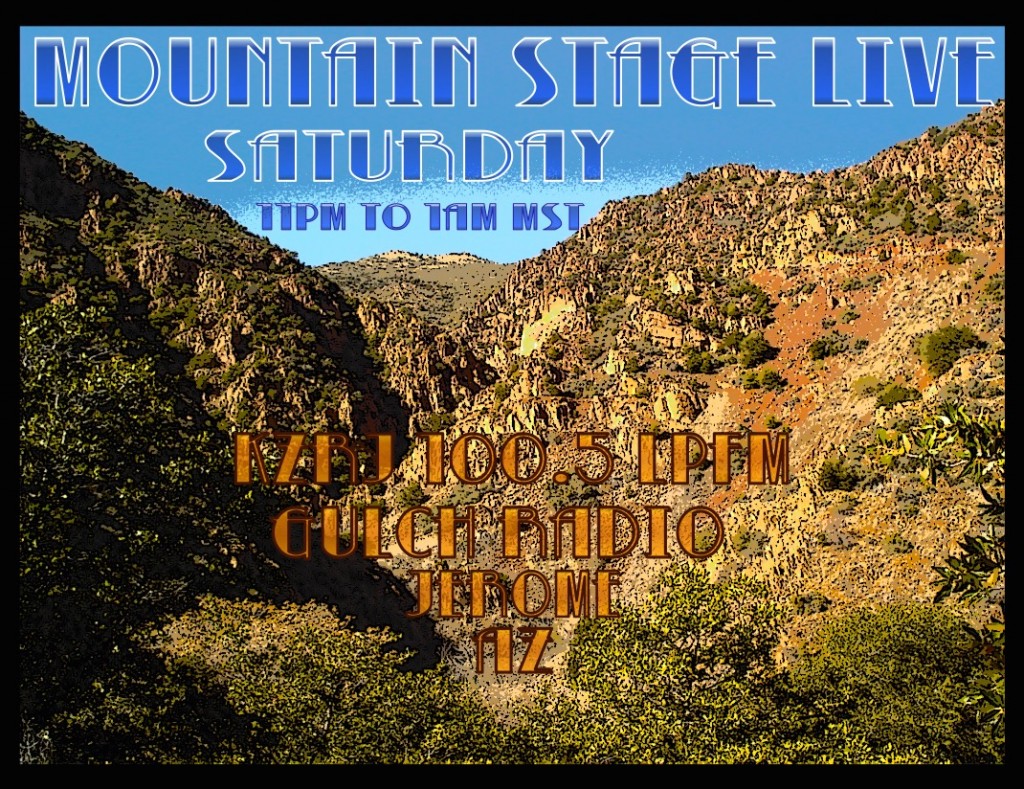 Hosted by Larry Groce, the program occasionally takes a road trip to bring music lovers rare and special events as they happen. For example, listeners enjoyed front row seats at a Nashville hot spot, joining enthusiastic fans in a salute to the Fairfield Four, legends in acappella gospel. With Mountain Stage, listeners are treated to the performers and the place.

This award-winning show is the longest-running program of its kind — over 1,200 artists have appeared on the Stage since it premiered nationally in 1985.

GulchRadio is the place to be every Saturday night at 11 MST – around the world at gulchradio.com, at home in Jerome, and the Verde Valley – FM100.5 KZRJ-LP.

Greg’s great show at a time when most of us can hear it. In true GulchRadio tradition Greg mixes familiar and unfamiliar cross genre music with both contemporary and traditional Native American music. It’s a special show – Sunday mornings are special on the Gulch. Presented through the courtesy of the NativeVoice1 Network. 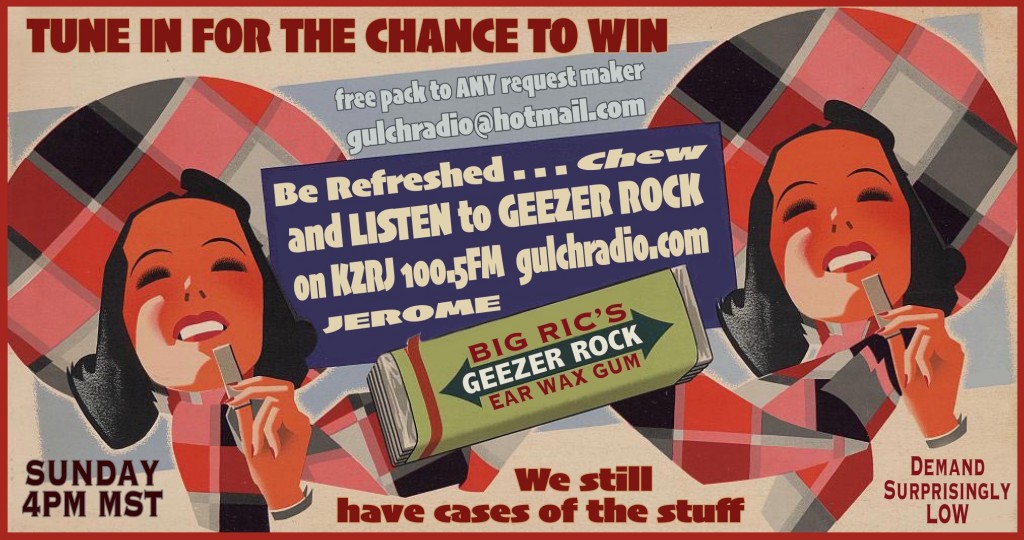 4 to 6 PM MST – The Geezer Rock Showlive from the studios of GulchRadio in Jerome, AZ – we bring you the roots of rock and roll, Mid fifties to mid 60’s rock. The artists that made the music move and forever memorable, sprinkled with a few old radio jingles and interesting old commercials, hosted by The Real Geezer. You’ll be entertained. PS – The Real Geezer takes requests online: gulchradio@hotmail.com 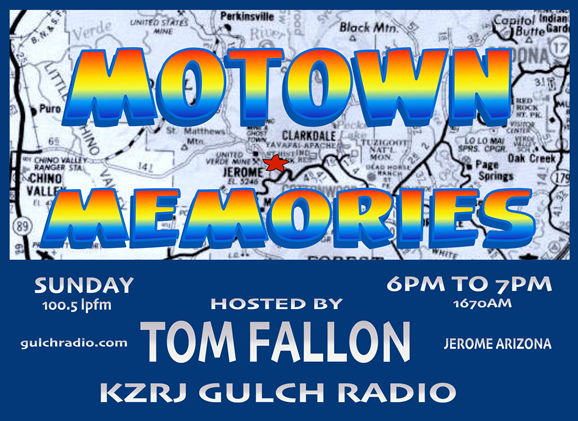 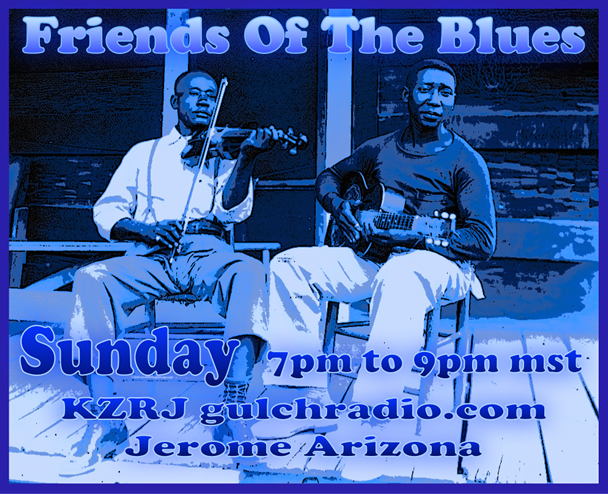 Sunday Nights – 7 to 9 PM MST – Friends of the Blueshosted by “Shuffle Shoes the Blues Guru” and Dr. Sky Dobro. Friends of the Blues features two solid hours of blues legends like Muddy Waters, Willie Dixon, and Sonny Boy Williamson; current “unknown” wailers like Kid Ramos and Too Slim and the Taildraggers; and regional stand-outs like “Mondo” Cortez’s Chicago Blues Angels, and the Kilborn Alley Blues Band. True aficionados the hosts are immersed in Blues culture; they know the artists, the labels, the recordings, the band members – and they do a good amount of traveling to live blues performances throughout the U.S. 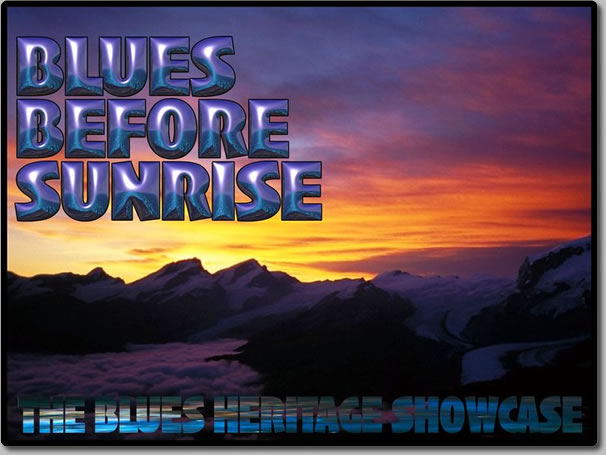 Sunday night 9 PM until 2 AM MST Monday morning Blues Before SunriseHeritage Blues on GulchRadio – For 17 years DJ Steve Cushing has aired Blues Before Sunrise, the “Blues Heritage Showcase”, over Chicago’s public radio station 91.5FM WBEZ, and for the last six years the rest of the country has also had a chance to hear his show via satellite – Blues Before Sunrise has long served an audience that includes loyal home listeners, musicians lounging on break, lovers in their living rooms, cab drivers and other service workers pulling the graveyard, and even teen airwaves surfers discovering an entire musical world peopled by cats who were hip before them.

Blues Before Sunrise showcases blues as part of a cultural landscape that includes jump and jive, rhythm and blues, swing, doo wop, gospel, comedy, and recitation, and never is the music presented as kitsch or retro fashion in the way that some music has been exploited and trivialized. For Cushing the blues is a living African-American tradition with deep roots.

As a musician himself bearing substantial credentials with Magic Slim and The Teardrops, the Lee Jackson band and Smokey Smothers and The Ice Cream Men, Steve Cushing numbers among his friends and closest associates the artists on this recording-fellow musicians to whom this is a vital, thriving music as well as a means of making a living. This is a great show that GulchRadio is proud to present – join us.

Back to the top of page.

The music is Freeform Rock n Roll Soul Blues Alternative, Old or New,
If It’s Good We Will Play It For You!

Internet stream, music royalties, electricity and special programs cost money - if you'd like to lend a hand.
Thank you.

You may click the "Donate" below to donate via PayPal..